Olycia is a daughter of the famous Ogano Sitte  out of a proven and succesfull damline of coloured sporthorses. Her mother jumped 1.40m with results and also her two half-sisters (out of Cento Lano and Vene Vidi Vici van orti jump 1.30m and 1.40m courses). 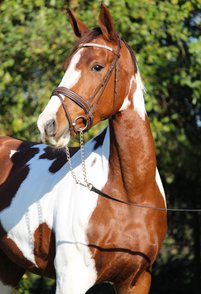 Grandmother Judy was imorted from Ireland. She jumped on 1.40m level with succes!

Centolien is the mother of Ivanhoe vd Dwerse Hagen (1.35m)